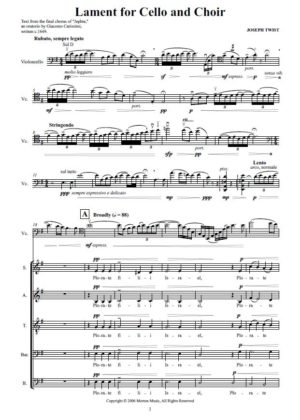 Lament is a piece for mixed choir and cello. The text comes from the 17th-century oratorio ‘Jephte’ by Giacomo Carissimi. The words are those of anguish, for Jephte promised to sacrifice the first thing he laid eyes upon if he returned victorious from war. He fulfilled this vow, even though this happened to be his only daughter.

The recording is of the Brisbane Chamber Choir, for whom the piece was written. The cellist is Gwyn Roberts.